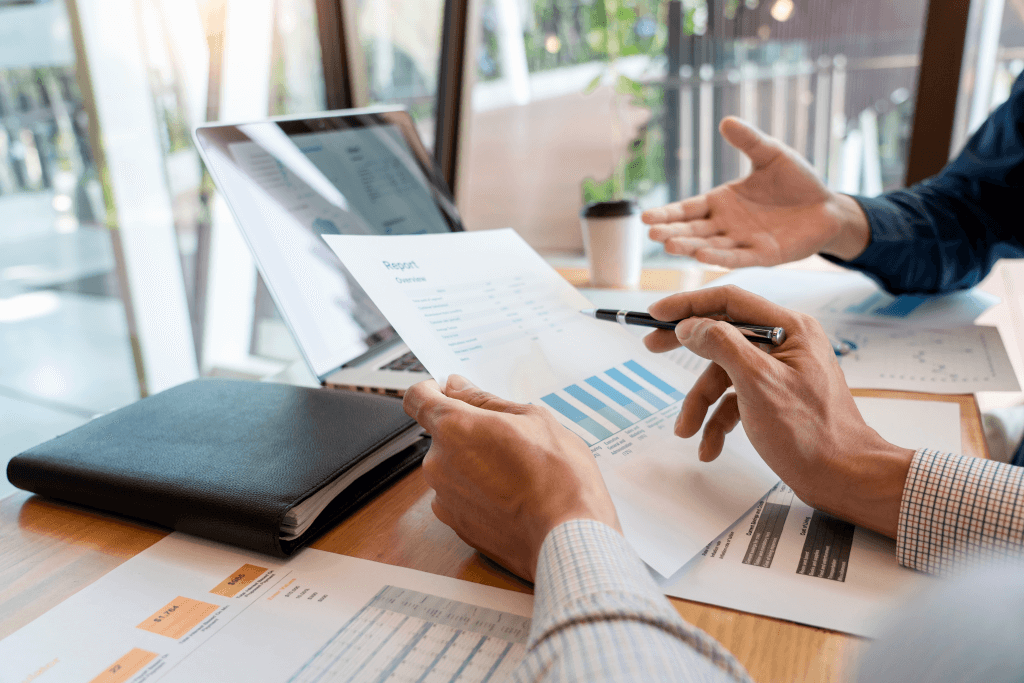 Ukrainian IT service market offers talented engineers and problem solvers, which is acknowledged by 110 world's well-known companies and startups that run their remote tech teams in this region. Ukrainian developers are ranked 11th among 50 countries in terms of quality according to HackerRank.

The monthly salary of a skilled engineer varies between $1,500–$2,500. The rate is higher for DevOps and experts with rare skill sets like AI and Data Science – the cost per month for such specialist can reach $6,000, which is the highest salary for a software engineer in Ukraine. The range is primarily defined by the technology stack, seniority of developers and a city where you want to build your tech team.

The average salary for software engineers in Ukraine

How much does Java specialist earn?

According to a recent report, Java is the most used programming language in the Ukrainian IT community. At the same time, this language ranks 4th most popular technology according to the StackOverflow report. Java experts earn $8K – 50K annually depending on the seniority level. As a comparison, a Java programmer salary in the US per year is around $102K. 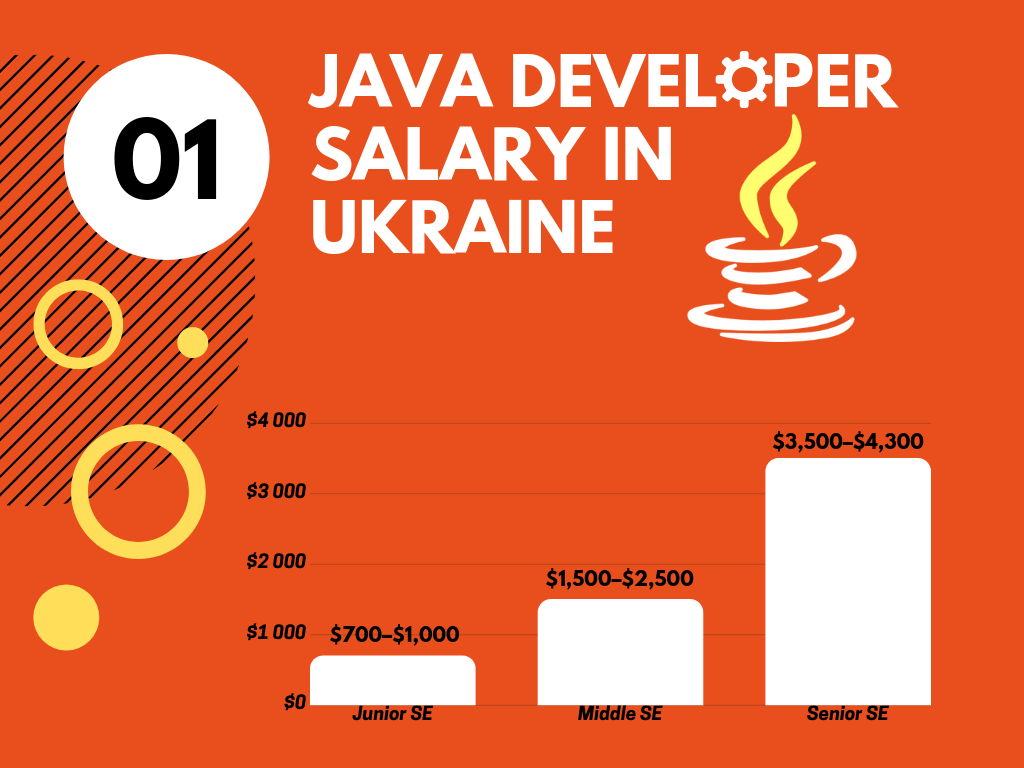 Today, the demand for .NET specialists in Ukraine is extremely high. According to dou.ua, nearly 400 hot vacancies have been opened for this position this month. .NET developer salary in Ukraine falls within $8K – $50K per year. At the same time, their counterparts in the USA earn between $46K – $104K. 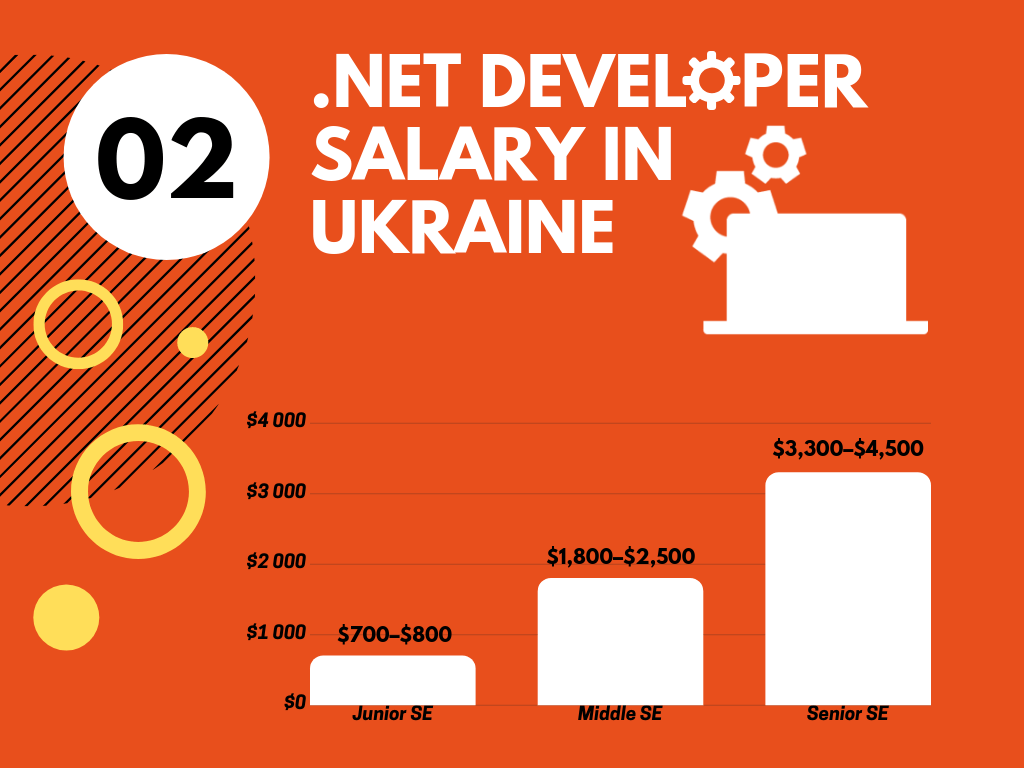 The average salary for Golang developer

Ukrainian companies offer fewer opportunities for Go specialists than .NET and Java these days. Yet this technology made the top ten most popular technologies among Ukrainian programmers in 2018. In fact, a Go specialist remains one of the most highly paid positions with the annual salary ranging between $8K – $54K, whereas someone in this role earns $136K or $70 per hour in the USA. Compare it with the UI developer salary: on average, such specialists make $87K per year and  $61 per hour. 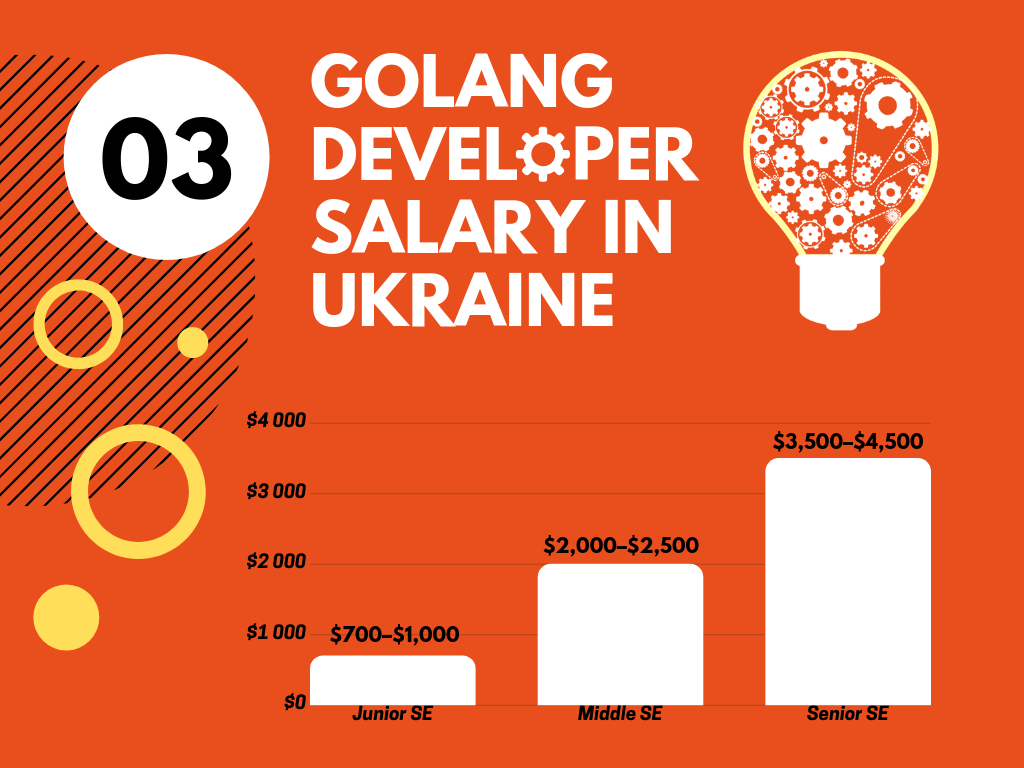 What is the annual salary for JS expert?

JavaScript skills are all the rage in Ukrainian IT. This language is the runner up to Java according to the language popularity report. The JavaScript developer salary is between $7K – $54K, being the highest for the most experienced developers as compared to other languages, with the exception of Python an iOS. On average, JavaScript experts in the USA make $112K per year. As a comparison, a junior web developer in Kiev makes about $6K annually. 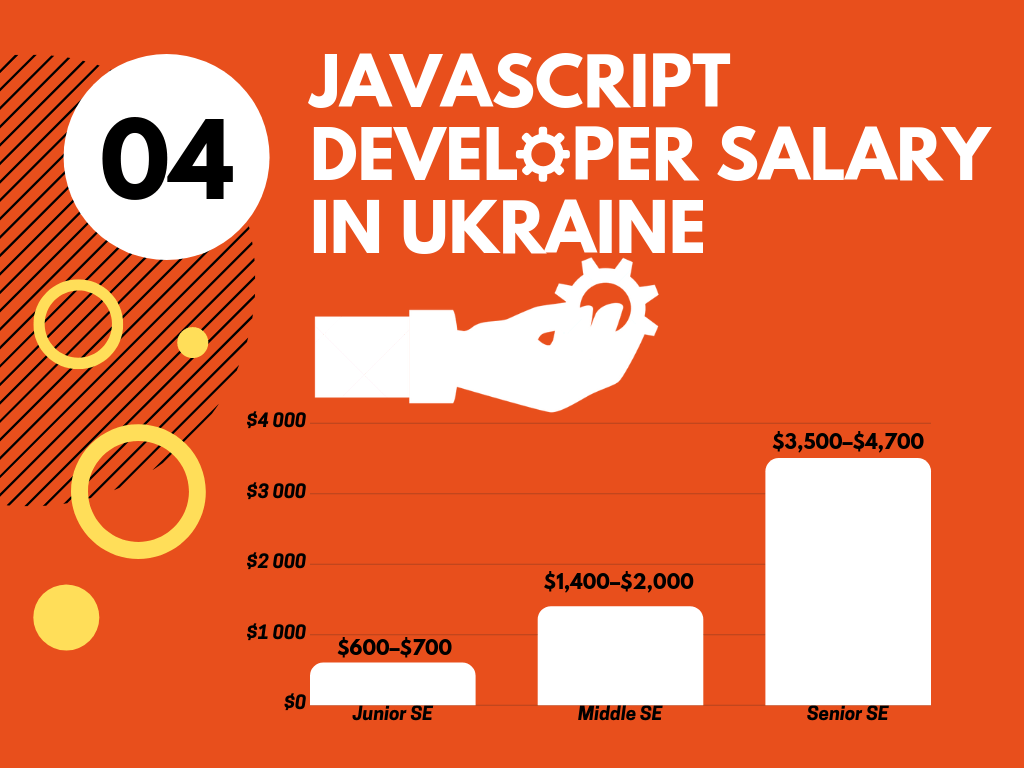 Although the popularity of PHP has declined, it still takes 4th place in the rank of the commonly used programming languages in Ukrainian IT. In fact, a slew of aspiring programmers chooses it to study as their first programming language, alongside Java, JS, C, C#, Python.  The PHP developer’s salary is one of the lowest for a junior role – $3,5K – 6K per year, while senior-level specialists make $24K – $48K annually. 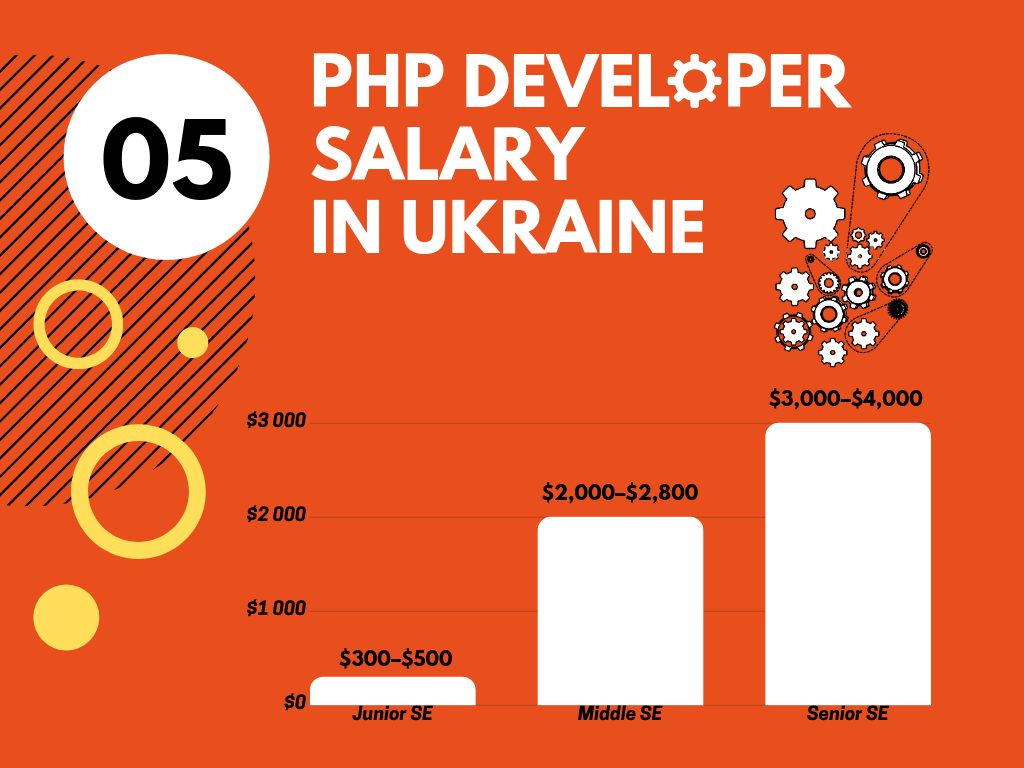 Python is on the rise in the Ukrainian job market, and it hands down dominates the Data Science field. This language tops the list of most wanted skills to learn alongside Go, TypeScript, and Kotlin. It’s also one of the highest paid skills for senior Python programmers in Ukraine – the annual salary can reach up to $60K. Overall, Python developer salary is between $7K – $60K, depending on a candidate’s experience. 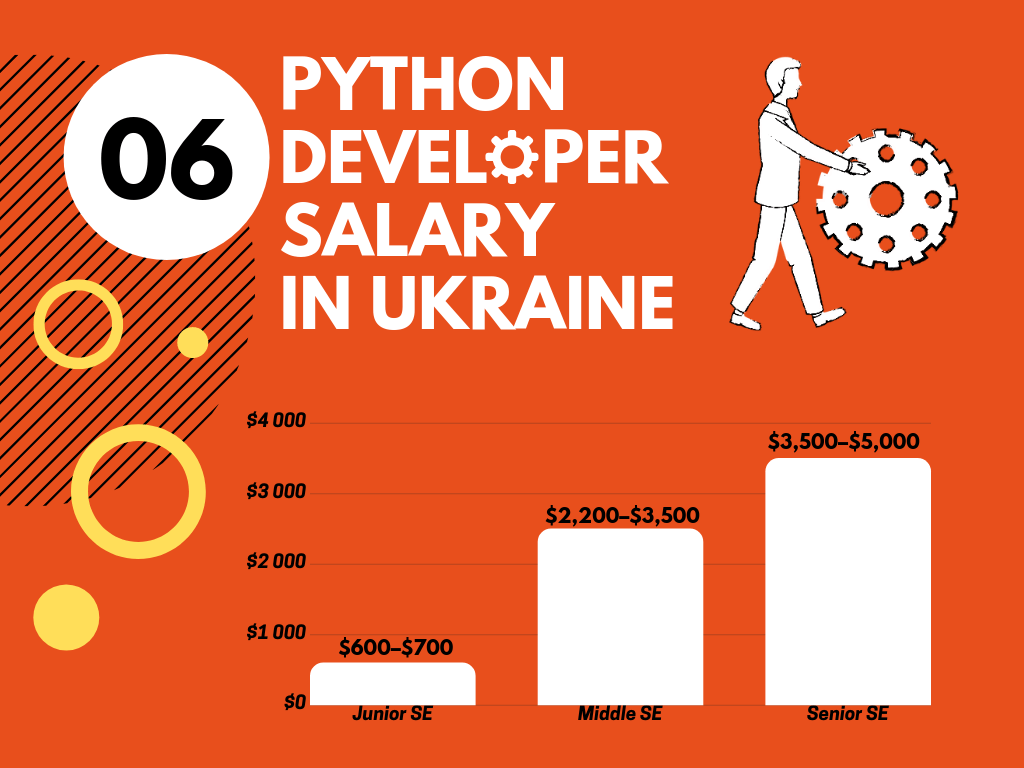 How much does Android developer make?

More and more Android experts start to gravitate towards Kotlin for programming on this platform. Due to its novelty, Kotlin specialists have fewer years of experience, but the language has been named among the most wanted technologies to learn. In Ukraine, a junior specialist with skills in development for Android platform earns approximately $7K per year, while a programmer’s salary in a middle and senior role is $42K – $54K. In the USA, Android specialists’ pay is around $113K per year. 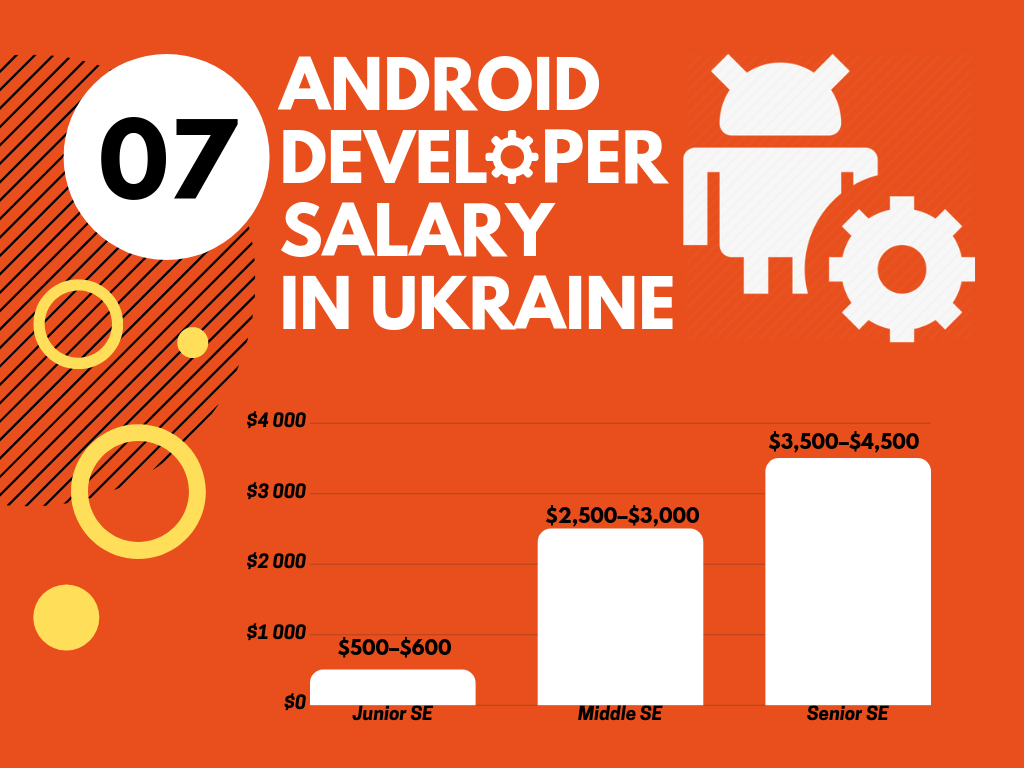 The average salary for iOS expert

iOS development is moving to Swift. This is typical for Ukraine as well, where Swift is now used by 75% of software developers involved in iOS projects. It’s no surprise that Objective-C is ranked as one of the most unpopular languages to learn. Ukrainian iOS talents make $6K – $60K annually, which is one of the highest paid skills in the market for senior level positions, together with Python and Ruby developers. 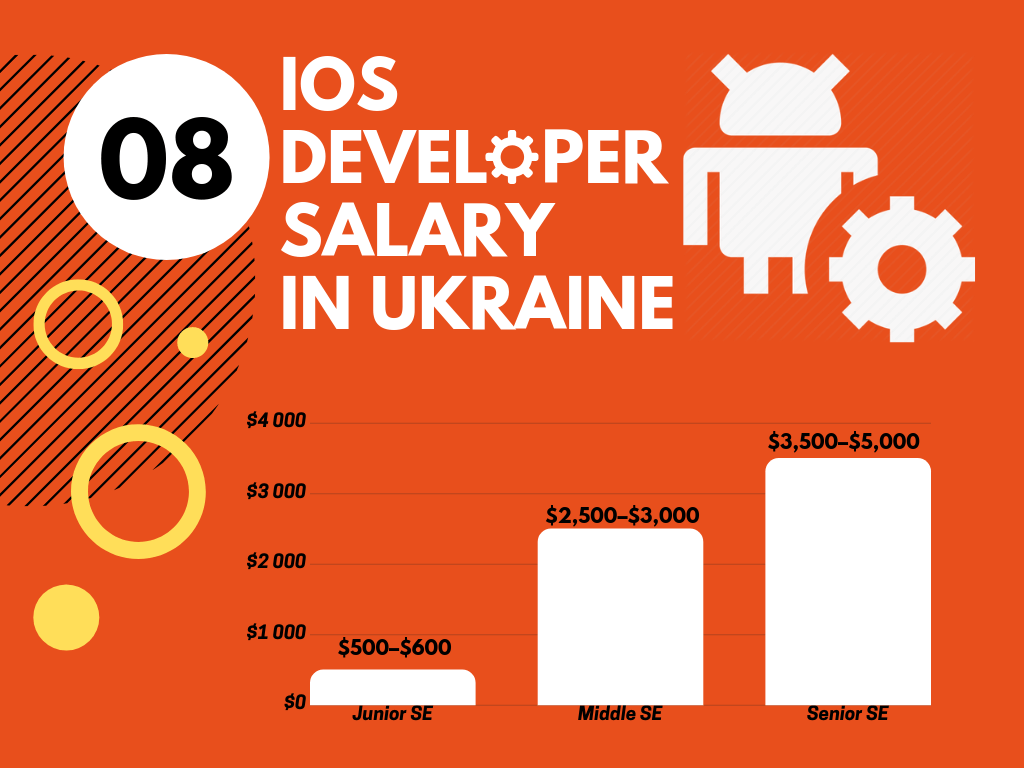 How much does QA engineer make per year?

With more than 500 vacancies opened this month, QA certainly is one of the most demanded skills in the Ukrainian job market. The QA specialist average salary is lower than front-end developer salary or full-stack engineer salary. This situation is similar in the USA, where an hourly rate of a QA specialist is $37 (approximately $6,5K monthly). 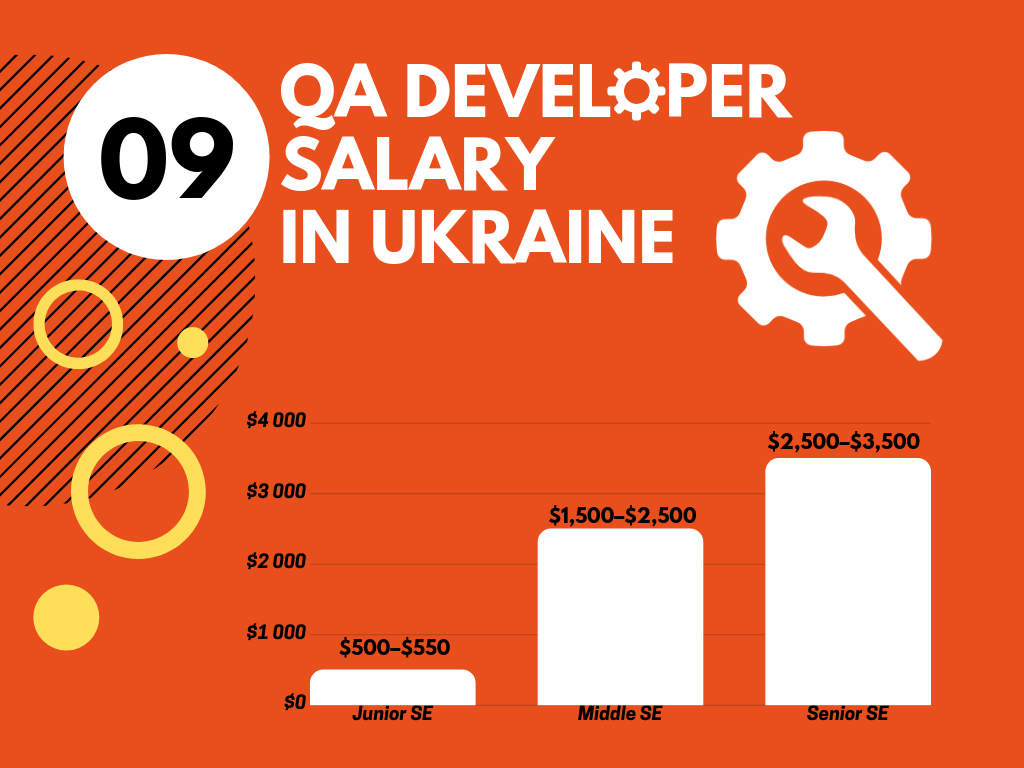 According to a recent report, the salaries of Ukrainian developers tend to stay without any significant changes over the past two years. At the same time, the industry keeps growing with currently 4 Billion IT service exports. The talent pool has reached 185,000 talents, offering a vast choice of skill sets and expertise. In Ukraine, it’s easy to build a team of skilled software talents with any title. Most of our clients have diversified teams involving strong juniors, several middle engineers and senior specialists.

How to benefit from hiring developers in Ukraine?

Hiring developers in Ukraine will be one of the most profitable decisions you will make for your business. The talent pool is rich and the value for money is beneficial. If you are looking to build your remote tech team in Kiev, talk to our experts who will be happy to guide you through the process.