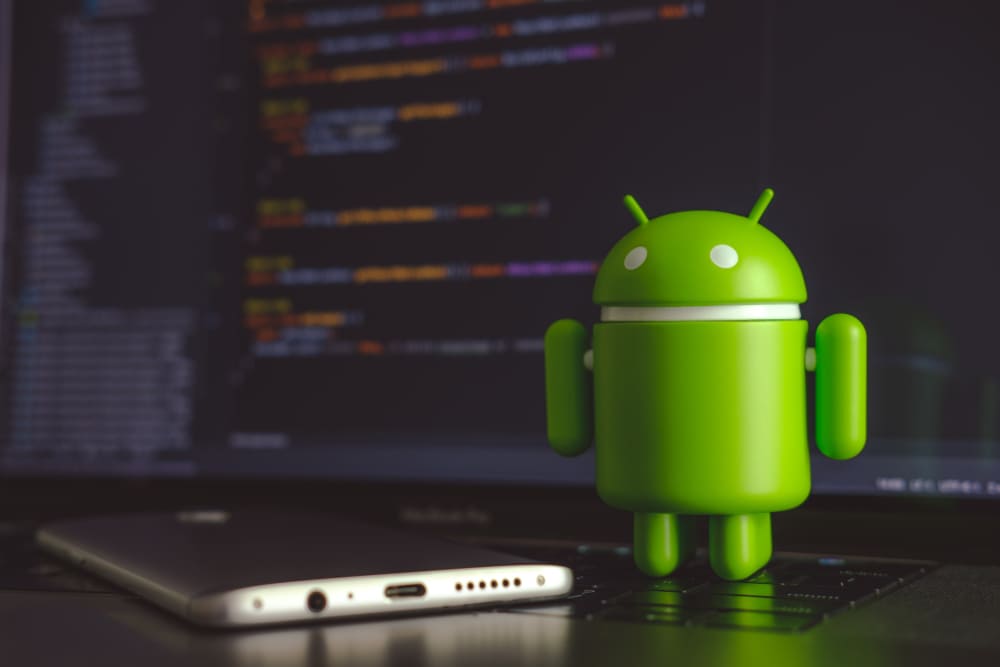 The Android operating system accounts for more than 81.7% of the global smartphone market share. No other operating system comes even close to these smartphones. And the trend doesn’t seem to be slowing down. In 2017 this number was 75%.

More and more active smartphone users opt for Android. And why wouldn't they? It's easy to use, most apps are made for it, and people have the choice of using whatever phone brand they want. The variety and freedom are what is most appealing to users.

Because of all of this, most developers perceive Android as the best operating system.

The most common activities of writing software are editing source code, building executables, and debugging. An IDE is an application suite where you can do all of those activities in one place. You can do the whole software development life cycle in an IDE.

As a result, many different Integrated Development Environments (IDEs) have been created for mobile app development. Many new are emerging, and the old ones are evolving.

Today we talk about the best Android IDEs for developers. We’ll start with a list of them, and then we’ll talk about them in detail. 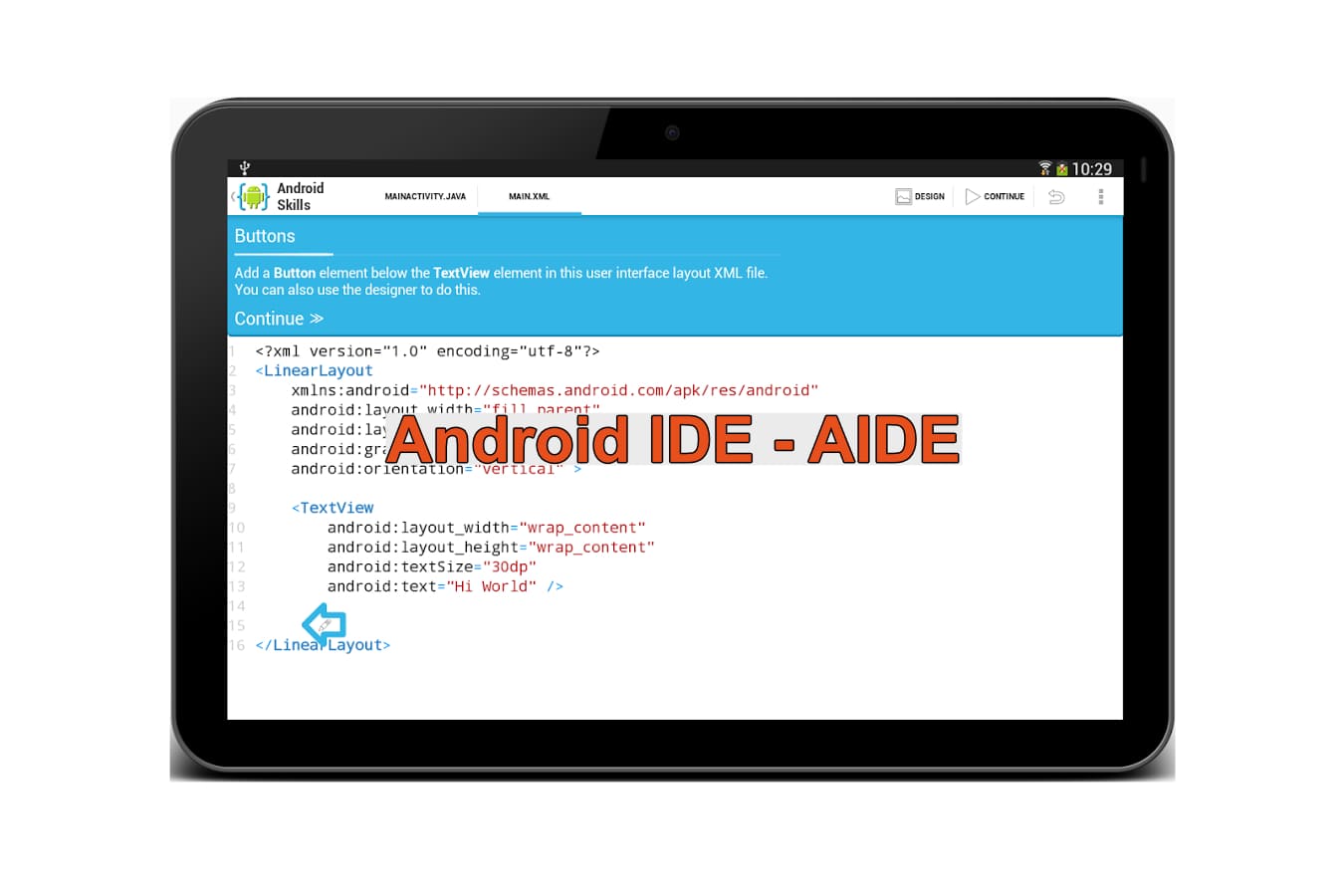 AIDE is an android IDE that is actually an application itself. It allows you to develop real Android apps directly on your Android device. At the moment, there are over 1 million downloads on the Google Play store, and AIDE is rated 4.0 with 50,000 reviews.

It’s the most popular mobile IDE java compiler for android and C++ programming.

This Android IDE app is user-friendly, and anyone can get a grasp on it very fast. A Bluetooth keyboard can be connected to the device for more comfortable typing. The smart syntax allows you to scale the window so you can focus only on one part of the code.

The free version provides almost all main features, and the ability to develop Android apps is at the palm of your hand.

The premium feature that is worthwhile mentioning is the tool that allows you to create user interfaces right inside the IDE. You don’t have to launch the app at all. Most other IDEs don’t have this ability. 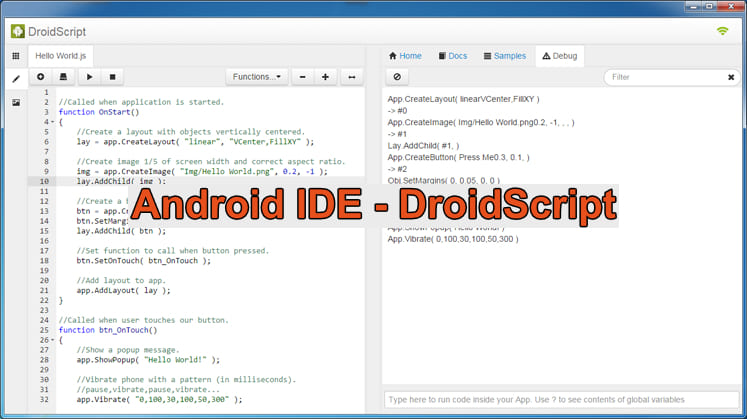 DroidScript is an Android IDE that promises to improve productivity and speed up development by up to 10x compared to other standard development tools.

It's another mobile Android IDE that doesn't require an internet connection to be used, and it doesn't use the cloud. You can work from anywhere.

If you like developing with a keyboard and a mouse, it has the DroidScript WiFi IDE tool, and you can easily connect your device to a web browser on Windows, Mac, or Linux PC.

DroidScript is friendly to new users, those who are just learning, and has many tutorials. It also features many plugins and extensions for more advanced users. 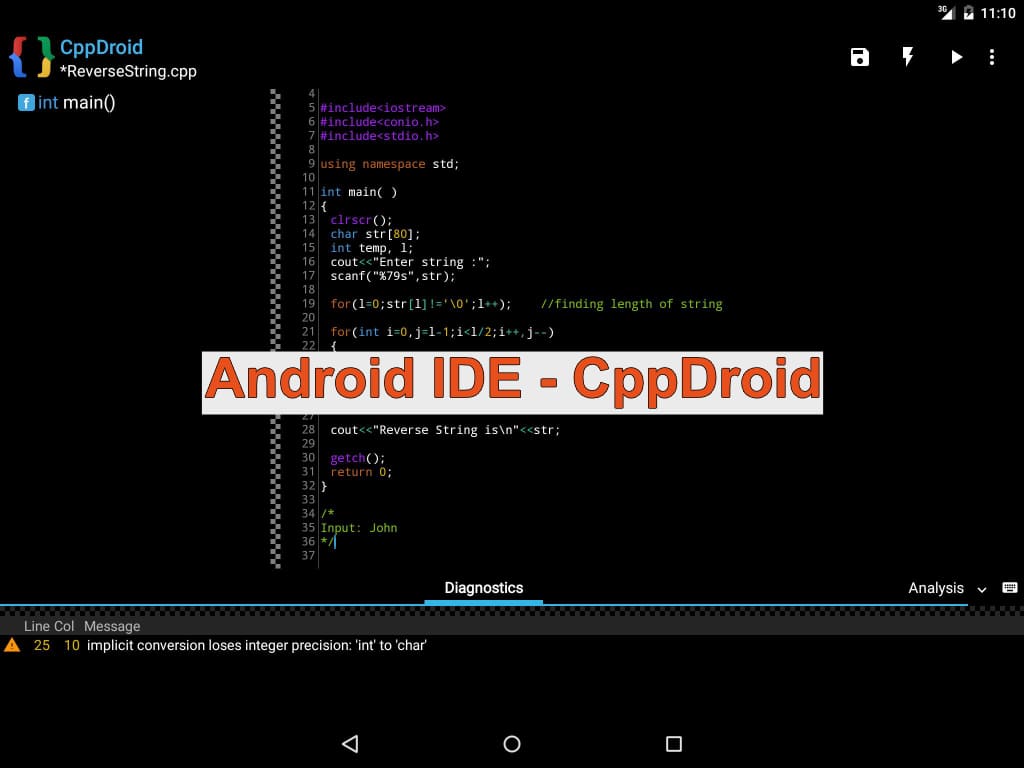 CppDroid is a simple android IDE focused on C/C++ programming. Just like the earlier mentioned IDE’s, CppDroid features examples and tutorials for beginners.

When you start the CppDroid app for the first time, it will download needed libraries and create a “Hello World” application.

CppDroid has a highly customizable editor with smart syntax highlighting. It features real-time diagnostics and fixes. It has a built-in computer that allows you to work offline. 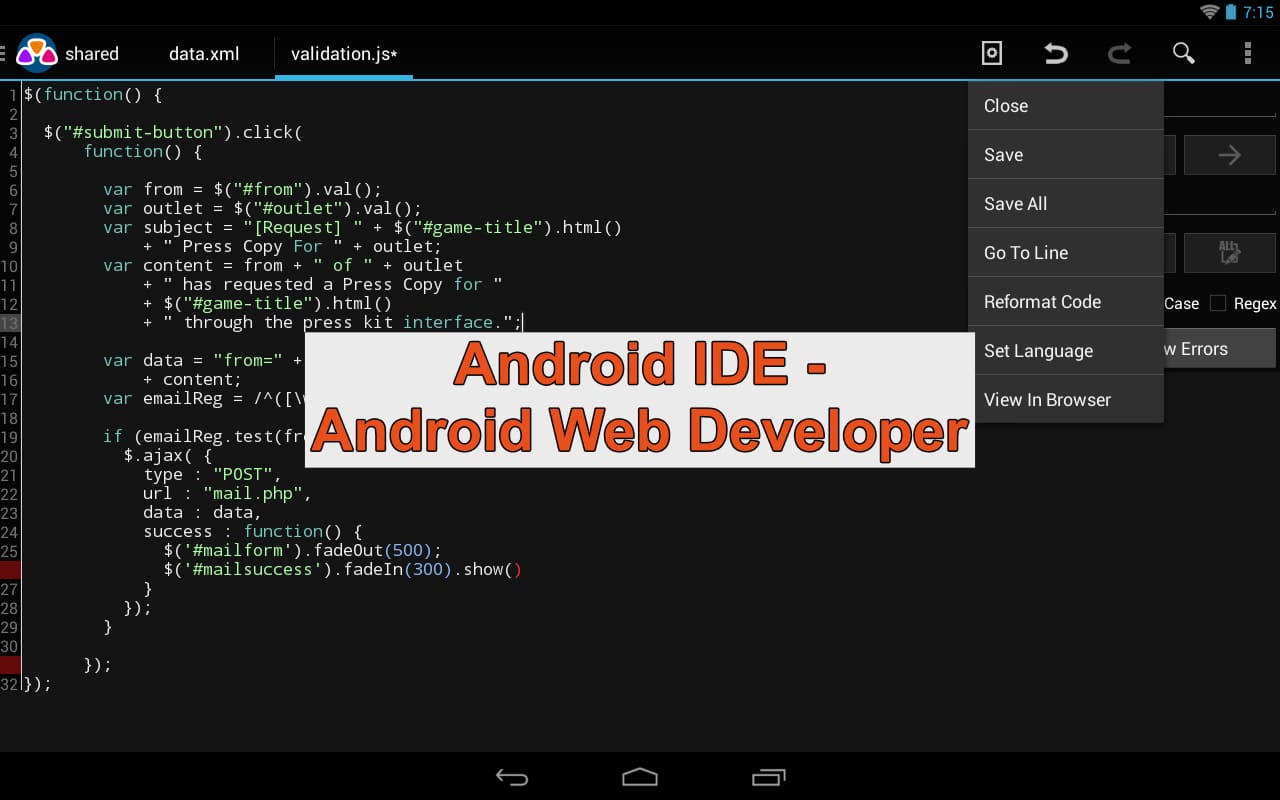 Android Web Developer (AWD) is another Android IDE that will turn your device into a real development box. It supports PHP, CSS, JS, HTML, and JSON.

It's probably the most massive IDE when considering the number of features. All major web languages and formats are supported, and you can access your files from anywhere using FTP, FTPS, SFTP WebDAV.

Code highlighting, code completion, hardware keyboard support, fast navigation, and integration are just some of the many features on AWD.

Unfortunately, most of these features, including no ads, are premium features that are paid only. 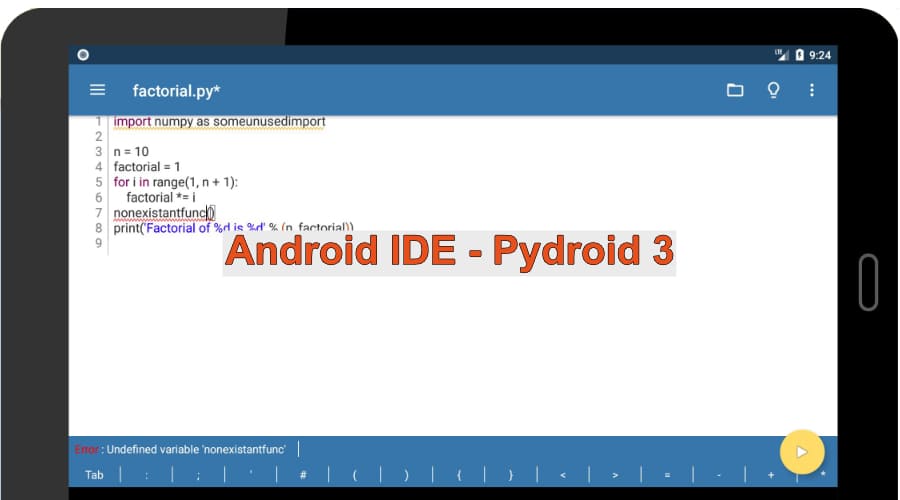 Python is a high-level programming language that is mostly used for app development and AI. There are many IDEs for Python on Android, but we chose Pydroid 3 as the best one.

Pydroid 3 is the easiest and yet most powerful Python IDE for Android.

Pydroid 3 features advanced libraries and prebuilt packages. Some of them are PyQt5, cython, matplotlib, numpy, scipy, pandas, etc. Also, there is a full-featured Terminal Emulator with readline support.

Although the developers behind it, call it an "educational IDE," it's safe to say it's a lot more than that. 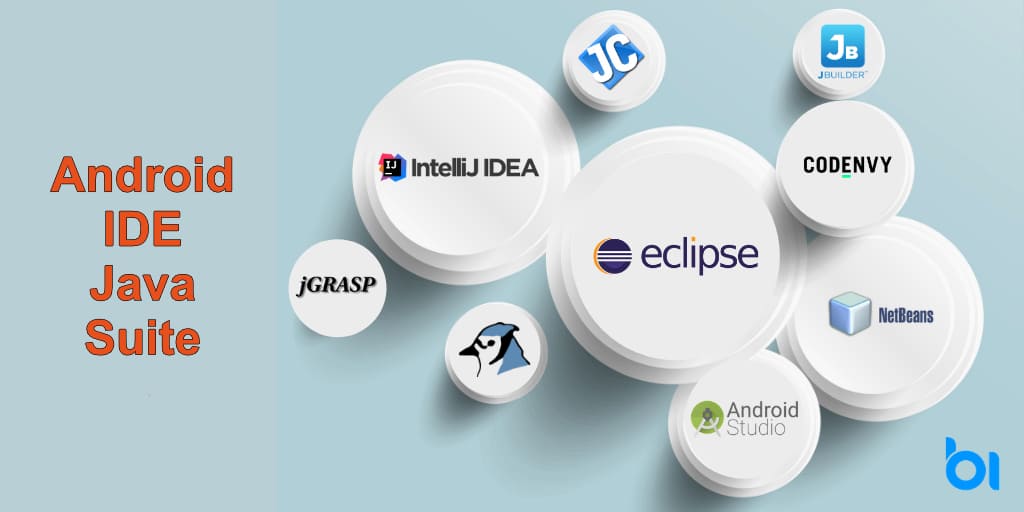 No matter which one of those you chose, all of them feature step by step tutorials for beginners and are powerful enough for the most advanced users. 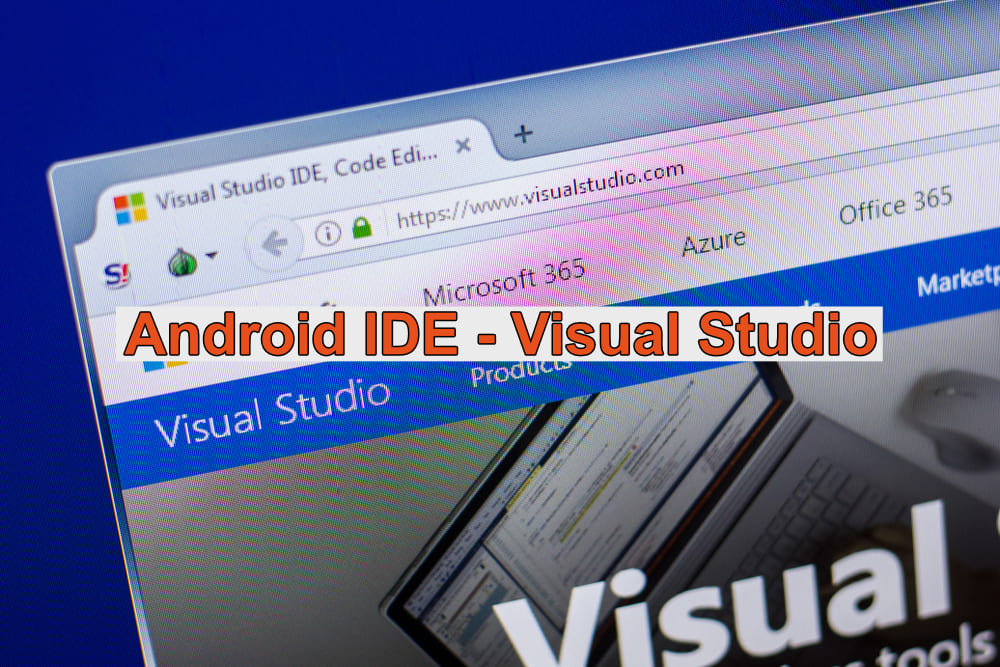 Visual Studio is the best Integrated Development Environment. Microsoft made it, and in the recent years, since it integrated with Xamarin it has become the first choice for Android development.

There are tools for swift coding and the ability to test different functions. No matter who you ask, they'll tell you that you can make jaw-dropping mobile apps with visual studio.

You can perform bug fixes really quickly and boost app speed. It’s the most efficient IDE. 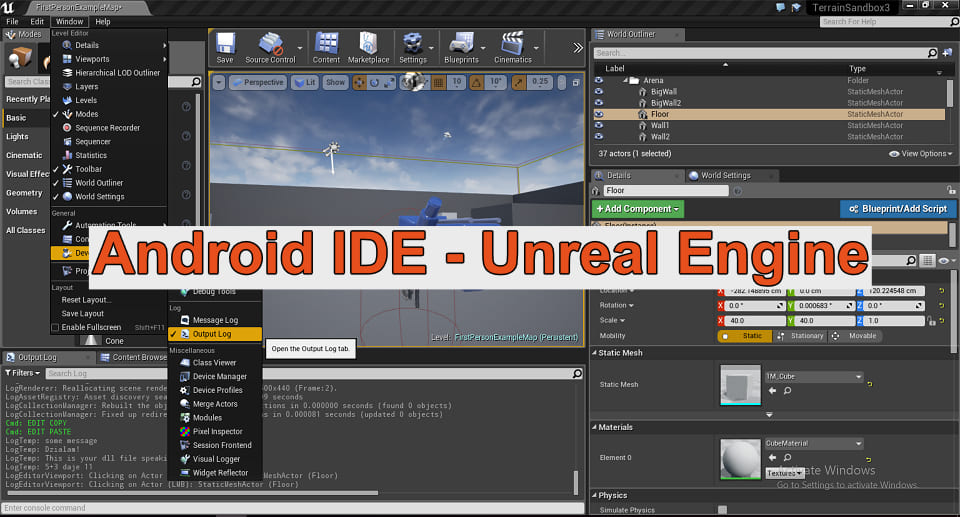 It's user-friendly and easy to grasp. It's also a very old game engine, and there are many tutorials and guides to be found on the internet.

The user can test the game thoroughly with the user-friendly interface. 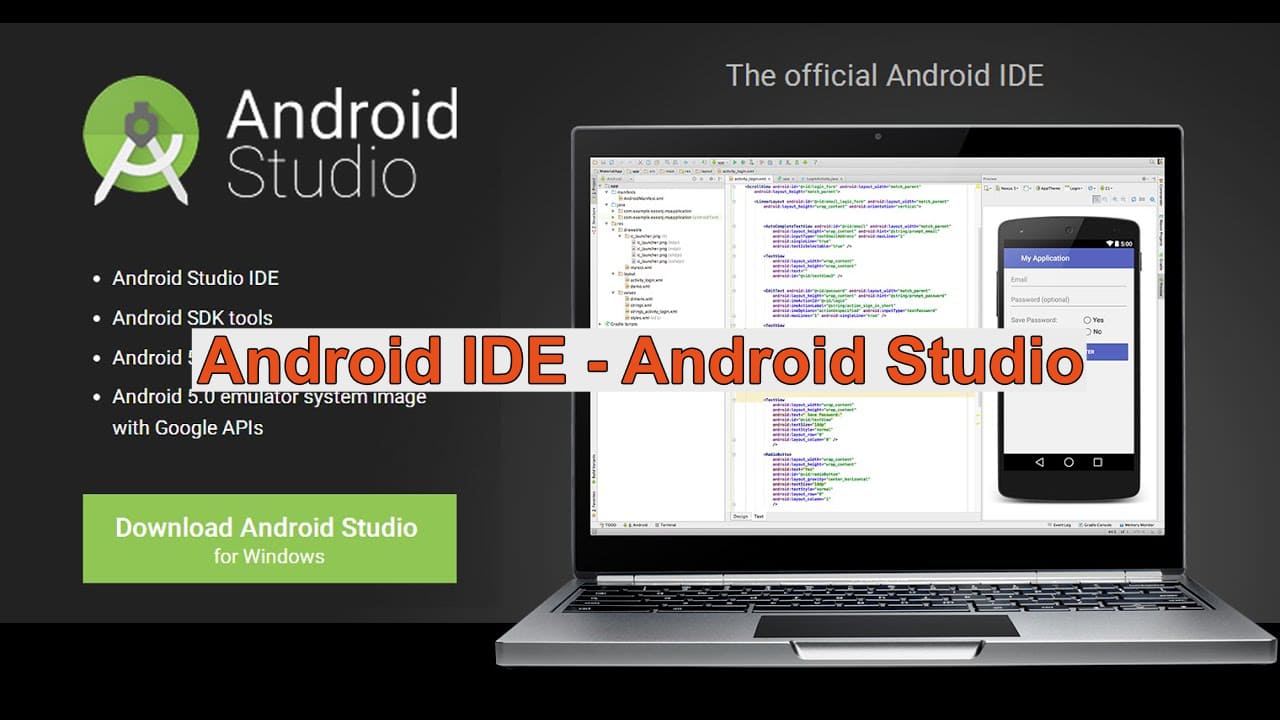 Android Studio is the official IDE for Android. It’s a software suite that was built by Google and has all the tools built in to build a high-quality Android app.

Android Studio is mostly known for its ability to accelerate the development process while not losing any quality.

If you’re new to Android development, Android Studio has many app-building tutorials. You’ll grasp mobile expressions for androids and enterprise development with ease.

Some of the best features are:

Among other features, Android Studio allows you to connect to other project files such as C/C++. There is also Google cloud integration. 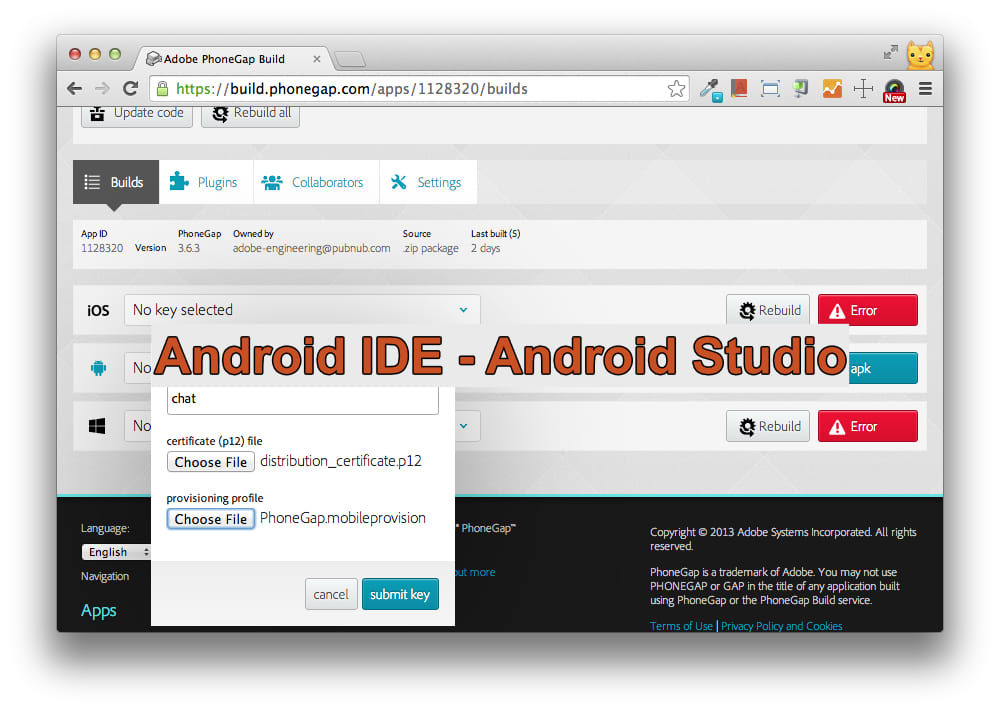 Apache and Adobe support PhoneGap, and it's a widely used IDE for Android app development. Using the PhoneGap desktop app and the PhoneGap developer, you can connect your device and see changes instantly as you type code. It's worth noting that it's an open-sourced IDE with fast debugging and cycle building.

There are many third-party tools, a vast community, and an extensive plugin library.

So which IDE is the best for Android development?

There are so many IDEs out there that it's hard to pick one. All of them have their pros and cons, and each mobile developer has his preferences on what he likes and needs when developing. The comparison of integrated development environments is mostly a subjective one. Some people like and use certain features more than others.

The same developers might use different IDEs for different projects. Some even start the project on one IDE and finish it on another one.

Android IDEs are created to save time while not sacrificing any quality. The more IDEs there are, the bigger the competition that means, the better the IDEs will become to stay relevant.

And that is excellent news for us, the developers. Finding an IDE that suits our needs and boosts our productivity is going to be a breeze.